A look into the 1889 N228 Kinney Bros. Novelties Set and its Six Variations

The N228 Kinney Bros. Novelties set is already a unique issue. Produced in 1889, these cards can be found but are not super plentiful. A total of six types make up the complete set, which features actresses and other women.

Some of these pictures were reused two years later in the N120 Duke/Honest Miniature Novelties set.

Some collectors may be familiar with the baseball cards, but most are not aware that there are six types of the Kinney cards in the entire set. They are as follows:

Interestingly enough, the different types have varying backgrounds, too. In particularly, Type 5 cards are difficult to find in uncut form because the backs of the cards encouraged collectors to cut them up. Those cards stated the following:

“The beauty and value of this collection is increased by cutting out to shape of design.”

It’s hard to say exactly why Kinney Bros. wanted collectors to do that. Perhaps it was so that they matched the other die-cut issues they created. But in that instance, why make the rectangular cards at all, then? It’s a question that isn’t ever likely to be answered.

The odd request worked, though. Pictured here is a perfect example of this happening. As you can see, a previous collector of this card cut out the circular shape on the baseball card, leaving some of the text on the back cut off. 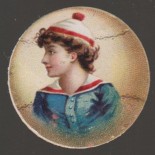 The baseball girl is the only baseball issue in the series. However, more than one card is known.

The baseball girl shows up in the die-cut N228-3 set. An N228-3 card is shown here. It might not look like a die-cut at first since many other Kinney cards in the series are round. However, it is a die-cut as it is the shape of a baseball. While the cards in N228-1 and N228-2 are round, all cards in the N228-3 subset are not round. Instead, they have various shapes and the baseball card just happens to be round because it is a baseball.

While some checklists only cite the N228-3 version of the baseball card, a total of three versions actually exist. 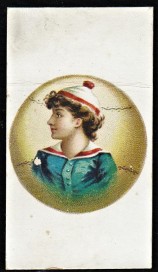 The baseball card is also in the N228-5 subset, which featured all rectangular cards. The only difference is that, instead of appearing on a circular baseball, the baseball image appears on a four-sided card.

As stated above, the baseball portion of the N228-5 cards have often been cut out, per the recommendations of the printer. As a result, many assume it is the regular N228-3 version, which is the circular card. But you have to check the backs to determine what you have. A back with only part of the words shown and the rest cut off mean the card was an N228-5 issue that was simply cut.

Of all of the Kinney types, N228-6 is by far the toughest. These are rarely seen and, helping to attest to their rarity, REA auctioned off a lot of nearly 900 Kinney cards across the six types in the fall of 2015. There was one N228-6 in the entire lot.

Backs of these cards state that there are 125 in the series. However, that could be incorrect with so few in existence. This site states that 14 make up the entire series. Jefferson Burdick, author of the American Card Catalog, also has his doubts. In his book, he listed the number of each type. For Type 6, he states only that the cards say there are 125 subjects.

For purposes of this site, until more information is found, I have listed 125 as the proper checklisted amount.

375 cards make up this set, although almost all of them are non-sports related. Below are pictures of cards for nearly the entire set.