1935 Godfrey Phillips In the Public Eye Set and Checklist 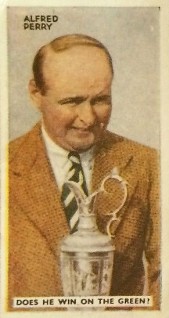 This issue was printed by Godfrey Phillips, Ltd. for use in their tobacco products. Cards featured famous people from a variety of backgrounds and a total of 54 were issued in the release.

Collectors should note that this is a different set from the 1930 Milhoff In the Public Eye set. Those cards featured sepia style pictures and had a different layout.

While many were non-sports personalities, a good number were also athletes from sports, including golf, tennis, and boxing, among others. The set is headlined by golfer Henry Cotton, tennis players Helen Wills-Moody and Fred Perry, and boxers Max Baer and Len Harvey. A non-sports cards that is popular depicts Winston Churchill. The card of cricketer Jack Hobbs is a popular one outside of the U.S.

The cards include color portraits with the athlete’s name on the front. The backs offer a biography of the person.

One interesting feature of this set is that, in addition to the athlete’s name, a trivia question is printed on the front as well. To get the answer, a collector had to find a different card where it was offered. That no doubt encouraged some to collect as many of these cards as possible.