These strip cards were issued by the Decalco Lithographic Company. While they are two sets, they are virtually the same. The W519 strip cards are regular images of boxers while the W521 cards are simply those same images reversed. Each set includes a total of 20 cards.

While exact dating for this set has not been confirmed, the W519 and W521 baseball sets are believed to date to 1920 and 1921, respectively, so I would expect these are similar.

Like other strip cards these are printed on low-quality paper and fragile. In addition, many were hastily cut by merchants or those distributing the cards and they are often seen with torn edges, missing corners, etc.

While this set is generally considered to be a boxing issue, there are also two wrestling cards included as well – those of Wladek Zbyszko and Joe Stecher. The boxing side is headlined by Hall of Famers Jack Dempsey and Georges Carpentier.

Numerous oddities appear on the cards. Like other strip issues, the colors can vary from card to card with printers likely exercising greater freedom in ink usage. In addition, many scrap types are known in the hobby with images not being aligned properly. While odd and commanding a bit of a premium, the market for these is not nearly as great as it is for similar types of printing gaffes found in popular baseball sets like T206 cards. 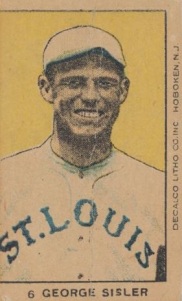 While the end users for these cards are not known, they appear to be the work of the Decalco Litho Company. We know that because their name is seen on the edge of some of these cards, as well as the baseball images, like this one seen here.

That company was a printer based in Hoboken, New Jersey. This page states that the company was actually born as the American Transfer Pictures and Printing Company in 1908. The company printed ‘toy goods’ and transfers, and was incorporated in 1918 under the Decalco Litho Company name. Collectors have often wondered why these cards printed reverse images but given their history as a company printing transfers, that may explain it.

That last part about the company printing transfers makes plenty of sense with regards to the boxing and wrestling cards they printed. As stated, Decalco printed both the W519 and W521 strip cards. The W521s are simply W519 cards with reverse images. You know – kind of like the ones that would be used when creating transfers.

Here’s a closer look at DeCalco and the cards.