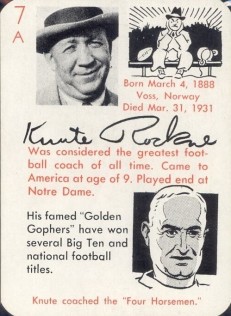 This unique set appeared in 1945 as a card game. A total of 52 cards were in the set, just like a standard playing card deck.  It was created by the Leister Game Company, based in Toledo, Ohio.

Each card featured a subject as well as his or her autograph. A brief biography of the subject was given (in red ink) and the bottom included a clue and cartoon image of another subject in the set (in black ink). The set included mostly non-sports subjects but several athletes were included from baseball, golf, boxing, and tennis.

The game was distributed inside of a red and black box with the title simply known as ‘Autographs.’ The box included the replica signatures of several subjects with Babe Ruth’s one of the few that was featured. A brief description on the box noted this was ‘a card game of famous people’ and that it was for two to ten players to enjoy.

Don’t sleep on the non-sports subjects, though. Plenty of big name celebrities are found in the set and, in particular, the set contains what is sometimes referred to as the ‘rookie card’ of Frank Sinatra. That card in decent raw condition can sell for $50-$100 alone.

There are a total of 52 cards in the set with four cards sharing the same number. Cards are checklisted below by the number they bear.