These confusing sets are often considered to be one issue. The reality is, however, they are two distinct sets.

Both are listed in the American Card Catalog as R302. One (R302-1) was printed in 1943 during World War II while the other (R302-2) was printed in 1949. The two checklists, save for a total of six players, are entirely different. However, the two sets used the same poses as the 1949 cards used the same artwork as the 1943 set, just attaching different player names to it.

While the set is classified as R302 in the American Card Catalog, it is notable that the R302-2 set is also curiously listed as W523, making it a strip card issue. These cards are, of course, strip cards. But the double classification of them is unique. Most collectors, however, know this set simply as R302.

The M.P. & Co. name is a bit confusing. But the initials stand for Michael Pressner and Company, a New York based business.

Fronts of the cards had basic cartoon images of the players. Aesthetically, the set is not known for great artwork. The images were so basic, after all, that most were used interchangeably for different players in the 1949 set. The player’s name appeared inside of a baseball. Backs had a biography of the subject on the front with the M.P. & Co. name at the bottom.

Both sets have 24 cards in them and these were printed in strips. As a result, you’ll often find them with uneven or even torn edges.

Both issues are pursued by collectors but, generally, the 1943 cards are worth more.

As stated, the sets share the same images just, in most cases, with different players.

Shown here is an example of that. To the left is the card for Ernie Bonham from the 1943 set. To the right is a card of Buddy Kerr from the 1949 set.

Two players, same pose. The other cards in the set follow the same rules. Six players are found in both sets and those poses do not change – Lou Boudreau, Ted Williams, Bob Feller, Joe DiMaggio, Pee Wee Reese, and Tom Henrich. 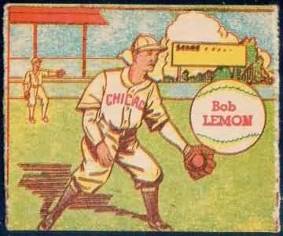 At least one unique variation exists in the 1949 R302-2 set, according to this Old Cardboard article.

The card in question is for Hall of Famer Bob Lemon. The pose used for Lemon’s card was used for Stan Hack in the earlier 1943 R302-1 set. Hack played for the Chicago Cubs.

When the pose was used for Lemon, a member of the Cleveland Indians, the Cubs name on the uniform was not removed. The mistake was eventually caught, however, and later Lemon cards had the name taken off.

The set also has its share of name oddities for players  Most of the names are normal but a few are different from how fans know players.

For example, Bob Feller is called ‘Bobby.’ Jimmie Foxx is known as Jimmy Foxx, though that occurs on other cards, too. The biggest anomaly, though, is the 1949 card for Yogi Berra names him Larry Berra, as Yogi’s real name is Lawrence.