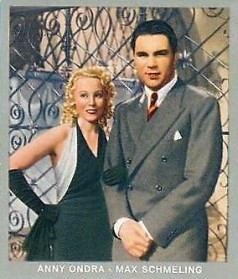 This set was distributed by Monopol Cigarettes and featured movie stars.

The cards were unique looking, featuring color pictures of actors and actresses inside of silver-bordered cards. Monopol was a German tobacco company and backs of the cards give short descriptions of the subject(s) pictured on the front as well as an advertisement and some pricing for their tobacco products.

Technically, the actual name of the set is called, “Künstler in Film.” Loosely translated, that means Artists in Film. Something more suitable in English would be Film Artists or Movie Stars. You will often seen this set referred to as that name in the U.S. instead of the actual German name.

Most of the cards here cannot be considered sports issues. However, one featuring boxer Max Schmeling is notable for boxing enthusiasts. Schmeling is pictured with his wife, Amny Ondra, on the card and she was an actress. The Schmeling card is No. 76 in the Series 1 consisting of 200 cards.

While it might not too uncommon in Germany, these cards are much rarer in the U.S.

To date, the only sports card known in this set is the one featuring Schmeling.