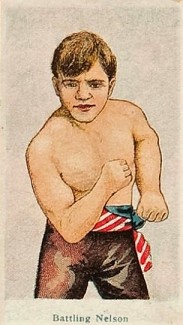 These caramel cards were issued in Canada and, as such, are given a V-Card designation in the American Card Catalog (V153). The set is similar to American Caramel’s E75 and E76 set and, in particular, the pictures and checklist perfectly align with E76.

Cards feature color images of fighters with a simple design and only their name at the bottom. And because the set was small enough, a complete checklist is printed on the backs, as was the case with many of the shorter caramel card issues where something like that was feasible.

Backs indicated the cards were part of a set of 20 Prize Fighter cards. As such, this set is sometimes called the Prize Fighters set. They were packaged with Robertson’s Pure Sugar Candy with one card wrapped with each one of those.

These cards are relatively hard to find and rarely on eBay. Typically, better conditioned ones are reserved for traditional auction houses. Even in nice lower grade condition, commons can sell for around $100 each.