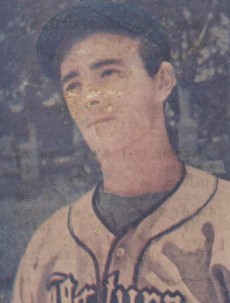 Produced in Cuba, this is one of the most substantial baseball card issues in terms of size during World War II. At 242 cards, it is a sizable set.

240 cards is typically the number cited as being included in this set with 12 cards for each of the 20 teams represented. However, as indicated in this post, two teams actually have a 13th card.

These are actually a type of album card as they were intended to be affixed into a collectible album made for them. Because of that, you will often find these with back damage or residue from them being removed from pages. Even cards that were never affixed into albums can be in low-grade condition because of the cards’ thin stock.

The set can be classified any number of ways. They were distributed by La Ambrosia, a company that made candy, chocolates, and snack foods. At a minimum, they can be classified as either a candy or food card. Thus, I have added this page to both of those classification pages. Additionally, because of their thin nature, they can also be called stamps.

Cards feature pale, low-quality color pictures of players. Backs include the players’ names, some brief statistical information, and an advertisement indicating that the collector albums could be received for 50 postal cards. The cards were not numbered.  As this is a Cuban card set, players in it will not be familiar to most American collectors. Players in it were on teams from the National Amateur Baseball League.

While the cards are somewhat rare, they do not typically sell for a ton of money. Decent low-grade cards usually start around $5-$10.

As stated, these cards were printed with the intention for them to be inserted into a special collector album.

A picture of the album is shown here. Like many similar albums, the quality of these is pretty low. The front includes pennants of the teams represented in the set along with the 1932 date and a baseball-themed design with the La Ambrosia name.

Pages of the album are brown with spaces for several cards on each page. Each spot included the player’s name, and some brief biographical/statistical information. The pages in the album were arranged by team and also included various ink sketches of baseball players.

These albums are not scarce but they also do not surface too often. Price varies greatly depending on condition but albums without any cards included in them typically start in the $75-$100 range.

A checklist for this set has not yet been assembled.