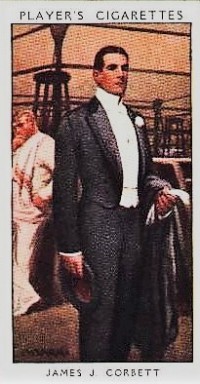 This interesting set featured gentlemen that were dressed up. Titled ‘Dandies’, it was issued by UK tobacco manufacturer Player & Sons for their Player’s Cigarettes product.

Almost all of the cards in the set are non-sports cards. However, one features former boxing champion James Corbett. Corbett, known for his style of dress was nicknamed Gentleman Jim, as indicated on the card. His card is No. 49 in the set and is the most popular one in the entire release.

Cards featured color pictures on the fronts and a biography of who was depicted was on the back. The cards featured lithographs with paintings by an artist named Christopher Clark.

Corbett’s was titled ‘Pompadour’ on his card. His biography reads as follows:

“The first dandy of the modern prize ring was an American bank-clerk who forsook his counter to become one of the most respected and popular of great boxers. He was Heavyweight Champion of the World from 1892 to 1897. Endured with superb physique and standing over six feet in height, Corbett brought brains as well as brawn to the practice of his profession.

An original thinker, he devoted much careful thought to boxing and ringcraft. Corbett’s pleasing appearance and charm of manner earned him the nicknames of Gentlemen Jim and Pompadour – the later because of the arrangement of his hair.”

While Corbett’s card is the highlight for most sports collectors, there are some other key cards in the series. Cards of Julius Caesar, Charles Dickens, and Sir Walter Raleigh, for example, are desirable.

In addition to this regular-sized issue, like other Player’s sets, a larger-sized, 25-card issue was also presented. Corbett, however, is not found in that issue. 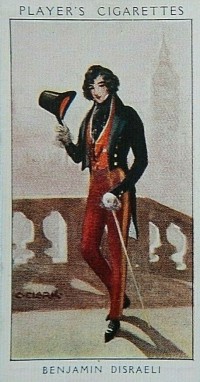 One card that flies under the radar in this set is No. 43 for Benjamin Disraeli, a Prime Minister of the UK.

Many do not pay much attention to his card. However, it is notable because an error was made in its production. When the card was initially printed, it pictured Disraeli at the age of 22 in 1826. The problem is that Big Ben, the famous clock tower, was in the background. That monument was not constructed until more than 30 years later in 1858.

At some point, this fact was pointed out by someone because the card was later corrected with the tower removed. That still was not ideal as the background was colored oddly from the removal. So a third card was actually printed, removing the majority of the background to create a more appealing, albeit, oddly blank, background.

To date, I have not observed much of a price difference between the variations.