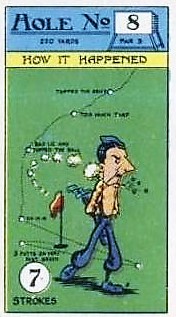 These unique cards follow a golfer’s plight during an entire round of golf. Taking it shot by shot, the cards illustrate each step of the way of a golfer’s unfortunate round.

The cards were issued by Imperial Tobacco and distributed in Canada. As such, they have a C-Card designation from the American Card Catalog of C31.

Fronts include color cartoon illustrations with each card depicting each shot on every hole. Thus, the first several cards show his shots for Hole 1, then the next group for Hole 2, etc., all the way through 18 holes. Two different back types exist and one included a mention of the offer to receive the C25 premium set described below.

The set is clearly meant to be a humorous one as the golfer did not have a good round. He is seen trying to make a variety of difficult shots while showing his frustrations.

While the cards do not depict real golfers, the cards are somewhat desirable because they are rare.

These six rare ‘cards’ are actually more like photographs. These were also offered by Imperial and, as a Canadian set, have an American Card Catalog designation of C25. The set could be obtained by collecting 18 cards from the C31 set with Holes 1-18 consecutively and totaling exactly 72 strokes.

These photos are rare and a reprinted set of them is known to exist. The originals are 9″ x 11 3/4″ in size. They were offered as part of the premium through December 31, 1927.

The photos feature color illustrations of early men golf in less than ideal conditions, often with dinosaurs in the background or other nearby hazards. They have white and green/tan borders, as well as the “Perils of Early Golf” name is printed in small font at the bottom center of the photos. Also on the photos is a 1925 copyright date and an illegible artist name.

While the cards are a bit easier to find, these premiums are rarely seen. Even when they are, they are often not identified correctly by sellers, making searching for them difficult. Sets were mailed to collectors inside envelopes with Imperial Tobacco Company labels (which included their 900 St. Antoine Street mailing address in Montreal).