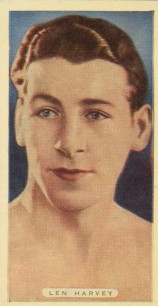 This UK set was one of several distributed in 1935 by Ardath Tobacco. These were found inside of packages of their State Express Luxury Cigarettes. As indicated by the name of the set, it included cards of champion athletes.

Athletes from various sports were represented, including boxing, golf, and tennis. Fronts of the cards have color pictures of the athletes and the backs include a short description as well as a mention of State Express 333 Luxury Cigarettes.

Backs also indicate that State Express albums for these cards were available from tobacco dealers.

Pictures in the set feature close-up portrait shots of athletes instead of action poses. The athlete’s name is also printed on the bottom and repeated on the back. As was typical on many international sets, the first names of several athletes are abbreviated. Some key athletes in the series included tennis stars Fred Perry, H.W. Austin, and Dorothy Round, boxer Len Harvey, and cricketer Donald Bradman.