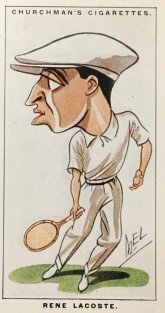 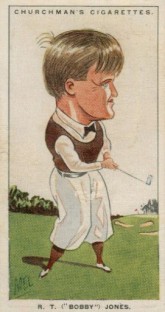 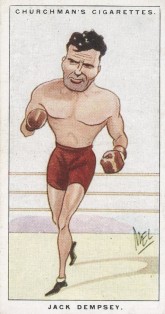 These UK set were distributed by the Imperial Tobacco Company for their Churchman brand tobacco products. Two 1928 sets (a small and large one) were printed and a large 1929 issue followed.

The smaller 1928 cards feature a total of 50 athletes in a variety of sports, such as boxing, golf, and tennis. Fronts include colorful cartoon images of athletes, often with oversized heads. The backs include a biography of the athlete. An artist signature of ‘Mel’ accompanies each picture.

The set is littered with big names that many American collectors will recognize, including boxers Jack Dempsey and Gene Tunney. Hall of Fame golfers Walter Hagen, Gene Sarazen, and Bobby Jones are in the set, too, as are tennis greats Bill Tilden and Rene Lacoste.

As was the case with the 1928 Churchman Lawn Tennis set produced in the same year as this one, Churchman created a larger set that is significantly rarer. That issue, however, is not an exact parallel as it includes only 12 cards as opposed to this one that has 50.

Finally, in 1929, Churchman distributed a second series to the larger 1928 issue. That one again included 12 cards featuring additional players from the small 1928 set that were not in the large 1928 series.

Confused? In all, there are three Men of the Moment sets: