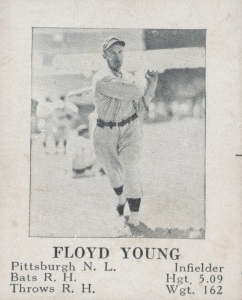 The 1936 Home Run Candy set is a rare issue. At first glance, these cards look exactly like trimmed issues from the far more common 1936 WG8 S&S Game cards. However, these are entirely different cards.

Otherwise, these cards look to be mirror images of each other on the front. Well, almost. The cards have a mirror image of the pictures used in the S&S set and the name/biography part is the same. But these cards are cut to a near square while the S&S cards are more elongated and have the rounded playing corner edges. Essentially, these cards look like cards that have been cut from the middle of the S&S Game cards.

These cards are much rarer than the S&S Game set. You hardly ever see them for sale but that has not meant they have commanded high prices. An SGC 1.5 Floyd Young sold for only $67 in a Love of the Game Auction, one of the few auction houses to ever offer one of these.

We know a little about these cards but, in general, there is quite a bit we do not. I break down some of the mysteries of the set here.

Finally, there are various different backs for these cards. Some are blank-backed while others have advertisements for Home Run Candy Bars.

Home Run Candy Bars are not exactly known. But one of these back types from a Heritage Auction promotes that product. The other does not have the Home Run Candy name on it but is believed to be a Home Run Candy card since the style of the card and even the ink color is consistent with the other.

Because so few of these have been seen, it is difficult to get a good handle on which backs are rarer.