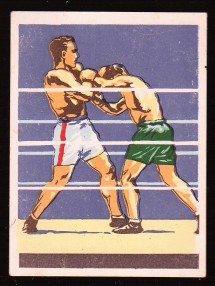 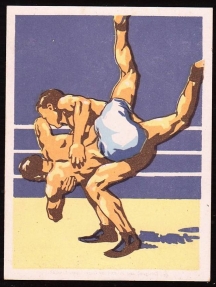 The 1936 United Tobacco Sports and Pastimes set includes a look at various sports and games in South Africa. One such sport included in the release was a baseball card (Card No. 18 in the set).

Cards featured color images on the front and a description of the sport in question on the back. Pictures of the cards were designed by Cape Times Limited and that company also printed them.

Most sports in the set are featured more than one card. Sometimes a men’s version and a women’s version was included. Other times, a professional and amateur received their own cards. And in track and field, there were numerous cards covering a variety of events. The most popular sports are baseball, boxing, tennis, golf, soccer, wrestling, and track and field.

While the set likely intended to feature actual athletes, it is often difficult to determine which ones are pictured on the cards.

The set often presented names of athletes on the backs of the cards. However, each card often names numerous athletes so it is difficult to determine which one is pictured.

Some, however, are easy to spot. One is card No. 50 that features cross country/distance runner Paavo Nurmi. While the set features South African athletes, the card notes that there was no recognized cross country champion at the time of issue. Nurmi’s name is the only one cited and the card can be considered to likely be a Nurmi issue. 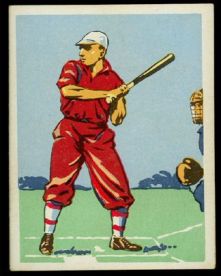 The baseball card featured a batting scene. A player stood at the plate in a batter’s box wearing a red uniform and white cap. Behind him, part of the catcher is shown.

The back has the following description:

“Baseball became firmly established in this country in 1934 when a S.A. Board was formed. In Transvaal and Natal it had been a week-end recreation, but in 1933, Province inaugurated a Saturday League and entered the inter-centre series.

Three teams are noted in the description on the back so it is likely that the player depicted on the front is a member of one of those teams. His identity, however, remains unknown.