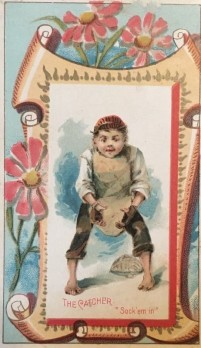 The 1889 Duke’s Cigarettes Terrors of America includes both sports and non-sports cards. Included in the set is a handful of baseball-themed cards. This is a complete parallel to the N88 set with the only difference being that the cards are larger and have a decorative background. The baseball cards, as you can imagine, are the ones that command the most attention.

The cards depict a number of boys in different situations. There are full color images on the fronts and the backs include a complete checklist of the entire set. New York based Knapp and Company Lithographs, the lithographer for the N88 cards, is again credited on the backs of these as well.

Boys are nameless and the images are generic. Still, despite that, these cards are still sought after by pre-war baseball card collectors. The cards are cataloged as N136 in the American Card Catalog.

The cards are much rarer than the ones found in the relative parallel N88 set. PSA has graded only about 50 of these cards to date compared to nearly 600 N88 cards. Prices for commons in this set typically start around $15-$20 with the baseball cards fetching significantly more.

Here is a checklist of the entire set. Unlike the smaller N88 set, backs of these cards listed the ‘Thanksgiving Day’ card in the checklist. That card was inadvertently omitted from the N88 backs.