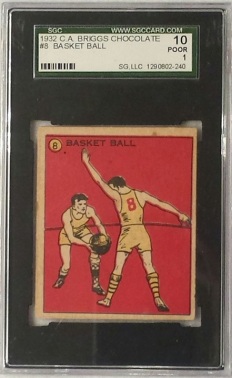 Around 1909, C.A. Briggs Company produced their first known baseball set, known to collectors as the E97 issue. About 25 years later, the company returned with a multi-sport issue that included a baseball card.

The baseball card featured New York Yankees slugger Babe Ruth as well as a brief description of the origins of baseball. The Ruth card was part of a multi-sport set and was the only baseball card in the release. There’s more for most collectors than simply Ruth, though. In addition to the baseball card, basketball, football, hockey, tennis, boxing, wrestling, and golf, are also featured.

The cards include cartoon images on the front against a red background. They measure just under 2 1/2″ wide x 2 7/8″ tall. Backs advertise a total of 31 total cards in the set.

Interestingly enough, while it was a multi-sport issue, the company offered only baseball prizes as part of a redemption program. Collectors could mail in a full set of the cards to the company in exchange for either a baseball, a baseball bat, a catcher’s mitt, or one pound of chocolates. In addition to the prize, the company returned the cards back to the collector.

C.A. Briggs must not have produced many cards in either set. The company’s E97 issue is difficult to find and the 1933 cards are even more scarce.

The image of Ruth in this set is an interesting one in that it was used for other collectibles as well.

The Ruth card looks eerily similar to the generic batter used on cards for an earlier board game – the 1922 Home Base Ball game. The two pictures are so similar, in fact, that it would be easy to theorize that the artist for this card used that rendering of a batter as a basis for the Ruth issue.

The same picture was also used in another game issue – a board game called Baseball Checkers. That game was produced in 1935, two years after this set.