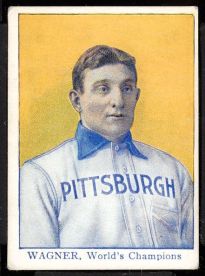 While collectors recognize this as the Tip Top Bread set, that bread product was actually produced by the Ward-Mackey Company, which also distributed several other trading cards with their products.

Each card in the set features a color lithographic portrait of the subject, his last name at the bottom, along with a ‘World’s Champions’ inscription. Like most other cards of the era, the cards have white borders around the exterior.

Backs of the cards had the complete checklist and the phrase, “Root for Tip Top” at the top Backs called the 25 subjects, the Pirates’ ‘most prominent members’ and also included the mention of a special promotion. In exchange for 50 labels from Tip Top Bread, a collector could get the entire set for free. Finally, the cards are a bit more square-like than your typical tobacco and candy cards.

The real highlight of the set is a card of Hall of Famer Honus Wagner. The card is similar in appearance to his famous T206 card.

Tip-Top Bread would return later with other cards and collectibles in the future. 11 years later, White’s Bakery in Baltimore distributed a set of Tip Top cards featuring Baltimore Orioles. In 1939, they produced pins of Yankees star Joe DiMaggio. Years later, they produced a massive 163-card set in 1947. Finally, in 1952, the company created bread labels with baseball players on them. 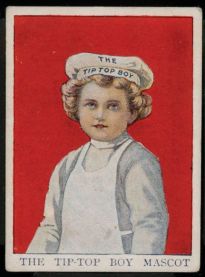 The short set includes mostly only members of the Pirates, obviously. But there are actually a handful of exceptions.

Card No. 1 features president Barney Dreyfuss and card No. 2 features the team’s secretary, William Locke. Dreyfuss’ card is particularly notable as he is a Hall of Famer and this is one of his few pre-war cards.

Additionally, Card No. 24 is the Tip Top mascot (a young boy) and No. 25 has a picture of the team’s home, Forbes Field.

Even though those cards do not represent actual players, they are both popular just the same as the others. In fact, they are among the more valuable cards behind Wagner. While low-grade commons from the Tip Top set generally start around $75, cards for Forbes Field, the mascot, and Dreyfuss are all worth significantly more.

Here’s a closer look at the non-players in the set.