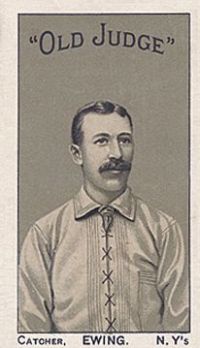 Some of the earliest baseball cards known, to say these are scarce is an understatement. The N172 Old Judge set contains hundreds of baseball cards, but only a total of 12 exist in the N167 set and half of it consists of Hall of Famers.

Fronts include the ‘Old Judge’ name, a black and white player image, as well as the player’s last name. The backs include an advertisement for Goodwin and Company / Old Judge Cigarettes. The set was produced by Goodwin for its Old Judge brand.

Often, photo credits are not provided on baseball cards. However, these did include them on the backs. The pictures on the cards were credited to Joseph Wood who had a studio in New York. Wood is also credited on a set of matching cabinets of the players, which utilize the same images.

While the focus of the set was on baseball players, there are more subjects included in the N167 set. In addition to baseball players, three boxers were also included in the set – Jack McAuliffe, Jem Smith (two cards), and Jim Carney. Beyond the athletes, there are also cards of actresses in the release as well. The baseball cards all have the same type of back but there are a few different variations of backs for the boxers and actresses.

It should be noted that the N167 series actually consists of two different types. Type 1 was identified by Jefferson Burdick in his American Card Catalog as being a thick card, measuring 1 1/2″ x 2 5/8″. Type 2 is also 1 1/2″ wide but slightly shorter at 2 1/2″ tall. The baseball and boxing cards identified here fall under Type 2. Type 1 consisted of only actresses. While there are only two different types, there are at least four different back advertisements.

Finally, the exact date of the set is up for debate. While it is most commonly cited as an 1886 set, it is possible that it was also produced in 1885.

Note that two of the baseball players have cards that misspelled their last names. Roger Connor is spelled as ‘Conner’ and Mickey Welch is spelled as ‘Welsh.’