1933 Orami Heroes of the Air Set and Checklist 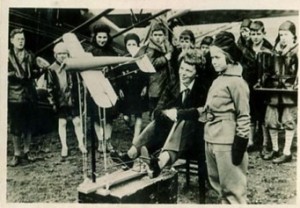 Orami issued numerous trading card series’ in the 1930s. One of those series’ (Series H) focused on aviation.

Like other Orami cards, these were black and white cards featuring real photographs. Card fronts include no text and include pictures inside of white borders.

Orami is perhaps most famous for a large set of movie stars issued in the early 1930s. But this subset is quite popular as it includes several big names in aviation, including Amelia Earhart, The Wright Brothers, and Charles Lindbergh, among others.

Earhart’s card, shown here, is typically the most desirable. The card, like all others in the set, is quite difficult to find, and pictures Earhart among a group of children with a model airplane.

A complete checklist of this series has not yet been confirmed.

tagged with 1933 Orami Heroes of the Air, Aviation, Tobacco Cards