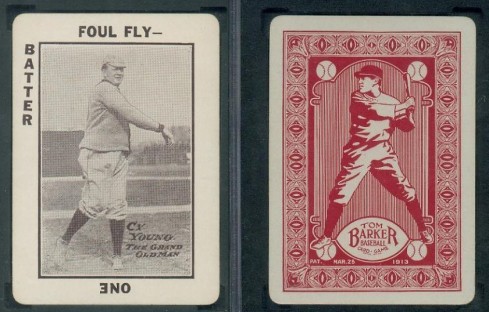 The 1913 WG6 Tom Barker Game set is a collection of 52 playing cards (plus an instructions card and score card). 43 are cards of specific players and the others are action shots from games. The game was developed by the National Baseball Playing Card Company, Inc. of Boston, Massachusetts.

The set was packaged in a standard playing card box with one of the action shots (running looking behind) on the front. Also in the set was an scorecard and rules sheet. Cost of the game was $.50.

Cards were similar to the WG5 National Game set in terms of look. The fronts had a similar look but the backs did have a slightly different design. The backs were also printed in red ink as the WG5 National Game cards were but the WG6 cards had a different design. The WG6 cards had a picture of a generic batter as well as the Tom Barker name printed on them.

The checklist of between the two sets is nearly identical as well. However, a few different players are substituted in each issue. That, subsequently, has helped to distinguish the two. As mentioned here, Hal Chase is included in both sets but has a New York card in the National Game set and a Chicago card in the Barker Game set. Chase was first with New York and then joined Chicago during the 1913 season. As a result, we can conclude that the National Game set was printed first.

I previously thought the Barker Game could have been produced in 1914 as many old newspapers referenced needing salesmen for it in that year. But 1913 newspaper advertisements show it was for sale as early as September of that year.

Unlike most other baseball games which typically geared their product to men/boys, Barker Game advertisements specifically targeted women and girls as well, mentioning that the game could be learned in only five minutes. This was somewhat unique as most advertisements for other games often specifically addressed a male audience. 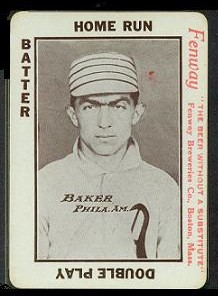 One interesting development is that these cards were also used as a trade card of sorts by at least one company. The Fenway Breweries Company in Boston, Massachusetts used these same issues and had a unique overprint added to one of them. The fact that a Boston brewery used these specific cards is understandable because the game’s creator, the National Baseball Playing Card Company, Inc. (as mentioned above) was a Boston organization.

It isn’t clear how they used the cards but there is no mention of a promotion that they were inserted in certain products. Instead, the overprint is a basic ad for the company. Printed in red ink, the overprint reads:

To date, the overprint is only known on the Home Run Baker card and the scorecard. Why the Baker card was chosen is a mystery. It is one of the first cards in the set but not the first, if taken alphabetically – that distinction belongs to Cleveland Alexander. The lone link to Boston seems to be that Baker’s Athletics team played the Boston Braves in the 1914 World Series. A full set of the cards was apparently issued and even came in a display box. However, the only card known with the stamp is the Baker.

One interesting note is that Fenway Breweries Company apparently did not open for business until 1915. And according to this page, they operated until only 1918. So while this set was produced in 1913, the overprint was not likely added until at least two years later. The result is that even though the WG6 set is known as a 1913 issue, the Fenway Breweries overprinted cards could be considered by some to be technically a later card. 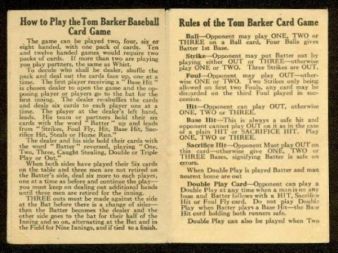 The game could be played with as many as eight people and required an even number of players. One person and their team (just one person if only two people are playing) would each receive six cards. Each player or team would play their six cards and record either strikes, foul balls, hits, sacrifices, steals, or home runs. Meanwhile, the opposing player or side would respond with one of their cards (reading, double play, triple play, caught stealing, out, one, two, or three).

For example, a player/team on offense could play a steals card to attempt to steal a base. The other player/team would need an ‘out’ or ‘caught stealing’ card to stop him from doing so.

The defense’s ‘one’, ‘two’, and ‘three’ cards are key here. If the player/team does not have an out card and cannot play a double or triple play card, they need to minimize the damage. So if the offensive/player team plays a ‘hit’ card, ideally the defense would want to play a ‘one’ to limit that batter to only one base in the event that they cannot record an out.