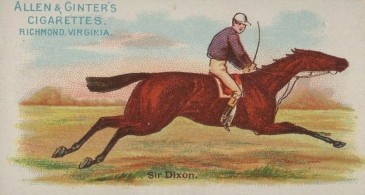 This was one of many horse racing sets issued by Allen & Ginter.

The cards feature jockeys and horses, though the focus is on the horses. That is evident from the fronts, which list only the names of the horses. Fronts also include the Allen & Ginter’s Cigarettes name along with their Richmond, Virginia location. The poses vary from horse to horse with some at rest and others in a full racing sprint.

The Allen & Ginter’s name is in blue while the name of the horse is in black and sometimes a bit obscured by the background.

As is common today, the names of the horses are often unusual. A few such as Dunbine, Stuyvesant, Insolence, Cyclops, Dry Monopole, and Emperor of Norfolk stand out, among others.

Backs include the checklist of the set, similar to other Allen & Ginter tobacco card issues. Back’s include The World’s Racers name at the top and tell us that the cards were inside of their packages, each containing ten cigarettes.

The cards are not everywhere but not terribly hard to find, either. In low-grade condition, most of the cards start in the $7-$10 range.