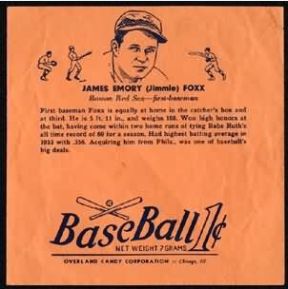 The R301 Overland Candy Wrappers set is a unique pre-war issue. Not cards, rather, these were wrappers the Overland Candy Company used for various types of penny candy, as advertised on the wrapper.

Issued by the Overland Candy Company based in Chicago, the wrappers included a player’s image and a biography. While most are printed on a light brownish paper, some color variations of the wrappers such as orange and yellow exist. The actual size of these should be 5″ x 5 1/4″. Smaller sizes are sometimes reported, however, those are trimmed versions. Like tobacco cards, I expect, collectors were more interested than the player than the company distributing them and wanted to remove that portion. Many have also subsequently been pasted into books so you will see a lot of them with back damage or residue.

Obviously, since most children did not keep the candy wrappers, the bulk of these were discarded, making them extremely rare. As a result, they can be fairly expensive on the rare occasion they are available. Even low-grade commons are usually more than $100.

Among those headlining the set is Joe DiMaggio. The wrapper is notable not only because it features a young DiMaggio but also gives him the nickname ‘Deadpan Joe.’ Others have similar names, including Tony ‘Push-em Up’ Lazzeri.

Several new additions have been made to the checklist in recent years, leading collectors to believe that there could be more out there. In March 2019, in fact, we learned of two new wrappers that were previously unchecklisted.

Finally, a few players have team variations, due to the fact that these were produced over several years.

While the set is a baseball issue, what many do not know is that a set of football wrappers exists, called the All American Football Roll.

One features Washington Redskins quarterback Sammy Baugh. One of those was sold in 2017 for nearly $4,000 in a BST Auction. The football wrappers have a different layout so for that reason, I would not classify them as part of this set.

One interesting thing is with regards to the dating. The set has sometimes been dated as a 1936 issue. It also has been cited as a 1938 set. However, both are incorrect, as proven by biographies on a few of the wrappers.

However, some wrappers were undoubtedly printed in 1936 as Fabian Kowalik is pictured with the Philadelphia Phillies while his bio mentions playing for the Cubs. Kowalik started the season with the Cubs, then went to the Phillies, and then went to the Boston Bees (all in 1936). That almost certainly indicates his printed at least as early as 1936.

The set extends into the 1940s and was obviously produced over a range several seasons with some being added later. A proper range for this set seems to be from 1936 through at least 1942 but it is possible some were also printed slightly earlier or later as well.

Here’s more on the dating aspect of this set.

Other Overland Wrappers (Including More Baseball)

Interestingly enough, these wrappers may not have been the first or only experience with baseball.

A different wrapper for their product included a special offer. That wrapper was used for a product described as ‘red hot chewing candy.’

For 40 coupons (or for ten coupons and five cents), a customer could receive an extra large transfer that would decorate a clothing item or other item, such as a pillow or handkerchief. Several options were available and one was called ‘Big Leaguer.’ While a specific player is not named, that sounds as if it would have been a baseball player. To date, I have not seen any of these transfers. However, even if one had surfaced, it might be difficult to tie it to Overland, anyway.

And in addition to the aforementioned football wrapper, Overland also had wrappers called “Fortune Rolls.” These had a picture of a fortune teller on them and also were for one-cent packages of their candy.

While some collectors would consider the red hot candy and the Fortune Roll wrappers to be nice complementary pieces to a collection of the baseball wrappers, those do not have nearly the same kind of value.

The set is so rare that a fully confirmed checklist may never be known. A wrapper for Dolph Camilli, for example, was not previously known until a 2008 REA auction was seen including one.

Ones in italics are believed to exist but ones I have not personally seen yet.