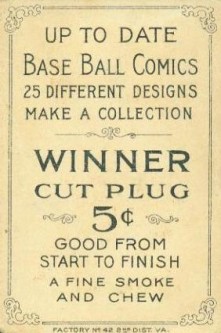 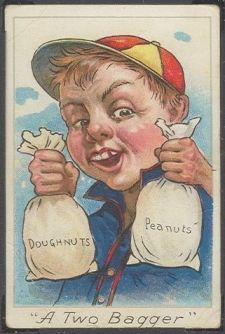 The T203 Mayo’s Base Ball set can be considered a non-sports card of sorts by some collectors at first glance. Fronts include baseball-related slogans with pictures of non-sports activities.

However, it is considered by most to be a legitimate baseball card set. That is because the set was is clearly cited as a humorous baseball issue as mentioned on the backs. The reverse of the cards call this series “Base Ball Comics” and relayed the fact that there were 25 different designs (cards) in the collection.

The fronts of the cards include a color image of a humorous nature. A title is printed along the bottom with the particular baseball phrase.

It should be noted that two different back types are known for these cards. The first, more common version, has an advertisement for Mayo’s Cut Plug tobacco while the second has an add for Winner Cut Plug tobacco.