Despite the fact that this is a minor league set with relatively unknown players, the cards are valuable, largely because of the extreme rarity of the set.

The cards are generally listed as a 1910 issue. However, it is quite possible they were distributed in 1909 instead.

By far, the most distinctive part of these cards is that they were printed with only a single ink color as opposed to being printed in full color. The cards for the different players can be found with different colors. In other words, the same player can have cards with different color tints. Some of the blue-tint card fronts appear to be black and white. These cards have either a blue, green, orange, or reddish tint.

As stated on the backs, cards were produced by Fulton Press, a company local to Virginia in Richmond. As shown here, there were some variations of the backs as well. The text was generally the same with the A.W.H. Brand Caramels name as well as the ‘Base Ball Series’ and ‘Va. State League’ text. However, the fonts, colors, and borders varied quite a bit.

The exact date of production for this set is not known. However, it is believed to have originated from around 1910 and most sources list it as such.

In addition to the backs pictured, a much rarer back can be found with the initials A.W.A. instead of A.W.H. It isn’t known what those initials stood for but there has been speculation about it being the name of the father and two of the sons. Only a few of the A.W.A. cards are known and it isn’t even clear that it was not a typo from the A.W.H. name.

Many of the players are found as minor leaguers/southern leaguers with the same artwork in the popular T206 set. While 12 cards are in the set, each card can be found in multiple tints, which means that a master checklist is considerably larger. 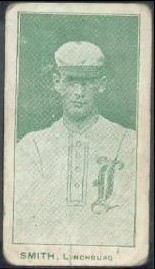 Four cards show only a player’s head and then had the rest of his upper body drawn. Eight players in the set were also found in T206 where artwork was available. However, four including Jim Ison, Paul Sieber, Arthur Smith, and Guy Titman were not included in that set, causing an issue when it came to artwork for their cards.

The four players all had something in common in that they had played with Richmond in 1909. As a post in this thread details, that solution came in using the heads from a team photograph.

Now, that sort of fixed the problem. The headshots of the players gave A.W.H. a picture of the player but other cards in the set included a player’s shoulders and at least part of his chest. So, to get around that, A.W.H. had that part of a player drawn onto his card. Shown here is the card of Smith, which has the top part of his jersey added by hand.

Here’s a closer look at this topic.

Note that a card for Jim Ison is often listed only as Ison on checklists. However, the full name of the player is Jim Ison, a minor league player with Richmond in 1909.