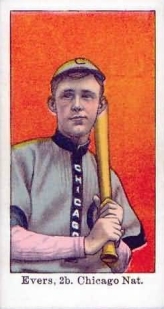 Dubbed as the E102 Anonymous set of 25, the distributor and maker of the set is currently unknown. It looks like a standard caramel card issue but who it belongs to remains a mystery. The cards are mostly referred to as a 1909 issue but have also been listed as a 1908 or 1910 set. Some sources even say they were produced over more than one year.

At 25 cards, this set included half as many cards as the E101 Anonymous Set of 50. But it shares a lot in common with that since since not only do these same players appear in the E101 issue, but the pictures are exactly the same as well.

Unlike that set, though, a complete checklist was included on the back. That was a little more feasible since there are many fewer E102 cards.

Note that while there are 25 different players, there are actually a total of 29 cards in the set due to some variations for a few players.

One of those, unfortunately, is also a Wagner (the throwing pose). Typically, collectors have the more expensive cards in a set professionally graded and that tends to make it difficult to judge population reports effectively. But even though Wagner is a star, his throwing pose card still has only a very small amount graded by both PSA and SGC.

Other tough ones include the Boss Schmidt card where he is tagging player, Dots Miller fielding pose, and Larry Doyle batting pose. PSA has graded only a handful of each these.

Here is the full set checklist of the entire set in order of appearance on the back. While I have listed players with variations, note that their names are only listed on the backs of the cards once (thereby showing a total of 25 players).