This small trade card set consisted of only two cards.

There’s not any great evidence to help pinpoint a date on these. And even the name of a lithographer eludes us as none is printed on the front as it often is. But given the Victorian style and lithography on these, they would seemingly date like most trade cards to some point in the late 19th century — likely the 1880s, when a glut of these sorts of cards were issued.

The thing that stands out, obviously, is that these cards are very much linked and form a small two-card set.

It should be noted that the only two bowling images in it that I have found are these. And even despite the style of the cards, the two images go together.

Look at the first card of the men — all of them following a ball that was rolled down the lane. The second card shows said ball arriving to knock down all ten pins and an unlikely target — a person. The second is quite clearly a continuation of the first card.

While there are only two cards in this bowling ‘set’, some collectors may consider them to be a part of a larger overall set for a few reasons.

First, a simple search of Star Cough Drops brings up several other cards with the same style of background. The images (at least for the cards I have seen) are non-sports related. But they are quite clearly in the same design and should be grouped with these. 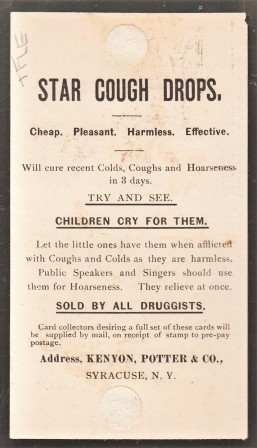 In short, collectors could receive one for merely the full price of postage. The interesting thing here is that the advertisement even has the words ‘card collectors.’ We know that there were such people, of course. But the card collector term is not one I see that often from this era. In fact, many times, the cards were actually referred to ask ‘pictures.’

I digress. Unfortunately, there is no indication of how many were in a set but it is difficult to imagine that they offered a full set and would only include two cards in it. The non-sports cards with this same design are quite clearly part of whatever the set consisted of.

Still, for the purposes of this article, I’ve listed only the two bowling cards as being those in the set.

Like most trade cards, these aren’t particularly easy to find. I’d not even seen them before until only recently and after running searches on them, have seen only a few examples.