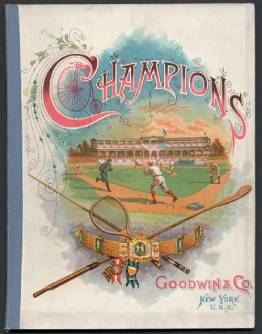 The 1888 N162 Goodwin Champions set included 50 cards of athletes and personalities in a variety of games and sports around the world. Of interest to most collectors in the U.S. are the eight baseball cards as well as the football card of Harry Beecher – widely recognized as the first American football card printed.

Among the four baseball cards are four Hall of Famers – the legendary Cap Anson, Dan Brouthers, Tim Keefe, and King Kelly. Other key cards in the set include Buffalo Bill and boxer Jack Dempsey, among a few others that can be difficult to find. Additional sports represented include tennis, track and field, and more. Some cards feature subjects playing things more along the lines of games, such as chess.

The A36 Goodwin album was a premium offered by the company to supplement the N162 Goodwin Champions Cards. Albums could be received in exchange for Old Gypsy and Gypsy Queen cigarette coupons. In it, were pictures of the 50 athletes in the set. As with other albums, these can be found completely intact, in individual pages, or with the individual cards cut out. The individual cards cut out have value, but are not worth as much as the regular cards. These cards can be distinguished from the other regular cards as they do not have the Goodwin tagline at the bottoms or the checklist of cards on the backs.

The N162 set is known for its colorful backgrounds and incredible artwork. Individual card cutouts from the album (when you can find them – they are rare) are a good, inexpensive way to secure these cards. 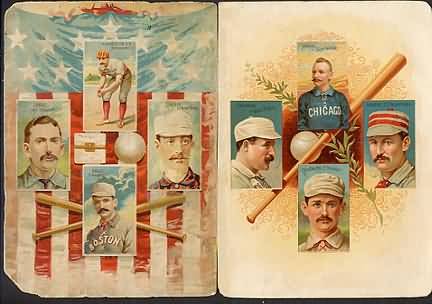 Below is a checklist for the entire set of cards included in the album.