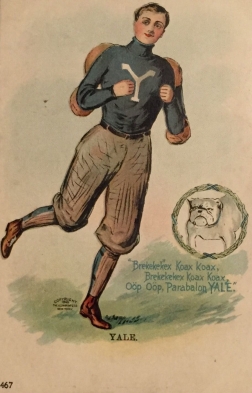 These postcards featured pictures of collegiate football and baseball players representing various schools. Athletes shown are not believed to be actual players, rather generic ones. This is a mixed set since baseball is featured on one card but it is primarily a football issue.

The set is somewhat unique because most early postcard series featuring colleges (especially in football), such as Earl Christy series’, typically revolved around females and fans/cheerleaders. This one focused only on athletes in the particular sport. In addition, the Ullman name is added in small font.

These postcards are similar in design to silks produced for Murad Tobacco products in the S21 and S22 sets.

Each postcard includes a color picture of an athlete with his school seal or mascot, school name, and a card number. A cheer revolving around the team is also printed on the fronts. Backs have a standard undivided postcard design.

One notable thing is that there is a large skip in the numbering on these. They were likely produced as two separate series’ with other sets filling in the gaps between the numbers.

Finally, note that these images were popular. They were actually used on other products such as beer steins/mugs and pitchers.