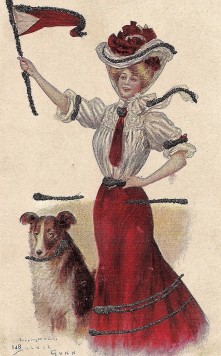 These postcards were similar to other issues produced around the same time period.

Each postcard featured a female fan or cheerleader for a particular school. However, instead of holding a pennant, which was common in other postcard sets, the girls are instead pictured with the schools’ mascots. Because school names are not listed, some of them are unknown. Princeton and Yale are recognizable by their colors and Tiger / Bulldog mascots, respectively.

Backs include a simple, traditional postcard layout without a divider line to separate the message from the recipient’s address.

Artwork was done by Archie Gunn and the publisher was the National Art Company.

The postcards are numbered on the fronts. Despite the fact that the numbers are in the 140s, there do not appear to be that many of these cards in a set. It is likely that these are part of a larger Archie Gunn set covering a range of topics.

Below are the postcards in the set I have identified to date. It is possible that others exist.