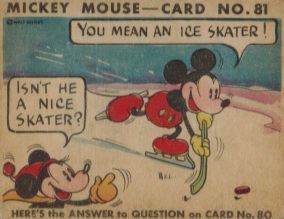 The V303 O-Pee-Chee Mickey Mouse issue was a set of trade cards featuring Mickey Mouse. While the set is desirable among non-sports collectors, there isn’t much to see here in the way of sports. One card, however, does feature Mickey playing a game of hockey.

Card No. 81 features Mickey with a hockey stick, skates, and a puck. With only skates, there would be less desire for this card. However, the presence of the hockey stick and puck make it a hockey issue and more collectible among sports fans.

The card, as others in the set do, includes a pun. Minnie Mouse is off to the side saying, ‘Isn’t he a Nice Skater?’ Mickey responds by telling her he is an ‘Ice Skater.’

The cards had a brief description on the back and also stated they were produced in London, Ontario in Canada.

In addition to the variation mentioned above, a U.S. set was also produced by Gum, Inc. The cards utilize the same pictures, descriptions, and card numbers. The only difference is that the Canadian cards state they were printed in Philadelphia on the reverse. That set is known as the R89 Mickey Mouse issue.

In addition to the hockey card, at least one golf card is known as well. Mickey and Minnie are featured as golfers with a caption, “Striking fellow, isn’t he?”

Known major sports cards in the set include: