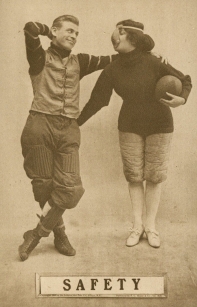 These postcards focused on romance, humor, and football. Each one depicts a romantic scene (sometimes involving comedy) and centered around the sport of football. All postcards have a football-themed title and participants pictured are wearing football attire.

The postcards were printed in sepia and have a simple title printed in a box at the bottom. As indicated in small font below the caption on each postcard, they are the work of the Colonial Art Publishing Company based in New York and were created in 1910. The company also produced a baseball and tennis set with the same style.

In addition, the set is similar to the 1910 Roth & Langley baseball set that mixed the sport with females and comedy.

Backs include a simple, traditional postcard layout with a divider line to separate the message from the recipient’s address.