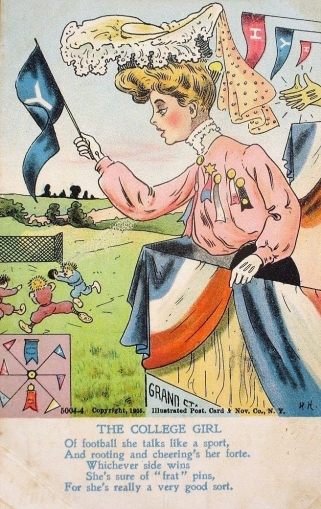 These postcards featured various subjects with humorous poems. They included both sports and non-sports subjects and at least two football cards and one golf card are in the set. These are artist-signed postcards with artwork by H. Herman.

These postcards are considered to be Vinegar Valentine issues. That genre includes various cards with comical or insulting depictions on them.

The main football card, titled ‘The College Girl,” is the key to the set for most collectors. It features a female football fan for Yale as they are playing a game against Harvard. While the woman is featured prominently, a football scene is in the background, clearly making it a football issue.

This postcard includes the following poem:

“Of football she talks like a sport,
And rooting and cheering’s her forte.
Whichever side wins
She’s sure of “frat” pins,
For she’s really a very good sort.”

A second football subject is included as well. This one depicts an athletic girl (titled ‘The Athletic Girl’) and features females playing a variety of sports, including football.

The cards are all numbered 5004 and have a suffix number added to the end. For example, the college girl football fan postcard is numbered 5004-4. Those are printed on the front as well as the Illustrated Postcard and Novelty Company of New York name and a 1905 copyright date.

In addition to the football and golf issues, a number of non-sports postcards are also included here.

As a brief aside, numerous other series depict women with pennants of various schools. While many do not include football players or football scenes, sets such as this one (that do have football present) make it pretty clear that those should also be considered a type of football issue.

Collectors should also take note that a similar series was also created in 1907 by the Rose Company. Those feature cartoon pictures and poems as well but are not numbered and have decorative borders.

The postcards I have seen in the set are listed below. Others exist but are currently unknown. As explained above, all numbers below are actually preceded by ‘5004-‘ on the postcard.

At least 29 exist in the series and more are possible beyond that.