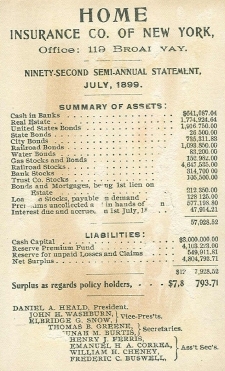 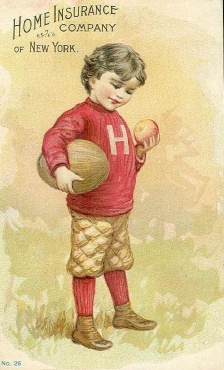 These trade cards served as an advertisement for various companies. The one shown here was for the Home Insurance company of New York, but the card can be found with more than one advertiser.

While this specific card shown here is an 1899 issue it was also used in other advertisements as well into the early 1900s. The cards could also have been used prior to 1899. As a result, some of these cards will be older than others.

The cards all have similar looks. Children are shown in numerous poses with a watercolor type of background. The background colors vary but the layout and theme of the cards are all generally the same. They are also numbered in the lower left hand corner, which also helps link them to the same set. Card numbering appears to begin with No. 20 but earlier numbers may exist.

The set features young children in a variety of scenes. It is mostly a non-sports set but is known for a card with a football player.

The key card in the set features an unknown boy in a football uniform and he is pictured with a ball and a piece of fruit. The shirt/jersey he is wearing is red with a white ‘H’, which is symbolic of Harvard, one of the earliest football teams. Because of that, it can be considered a Harvard card of sorts and will generally be more popular than other generic issues.

The card is one of the earlier known football cards. This specific one shown here can be dated to 1899 since the back of it includes the company’s semi-annual financial statement from that year. Printing financial statements on the backs of trade cards was popular, as was done on this 1902 baseball issue for Met Life.

Finally, the football card also has a small printed No. 26 in the corner. Small numbers were commonly printed on trade cards, likely in an effort by the printer or artist to organize them in some manner.

The No. 26 on the card is found with a slight variation. Some of the cards, such as the Home Insurance Company of New York one from 1899 shown here, has the print ‘No. 26′ on the front. Others, however, have a slightly different version. The Royal Gem Flour version of the card (same picture, different sponsor) simply has ’26’ and in a different font.

Other slight variations could exist as well.