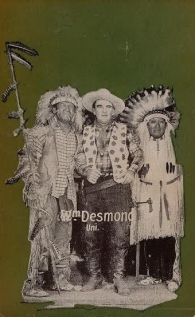 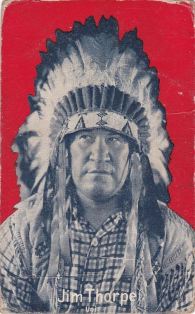 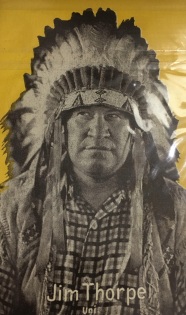 Most collectors know Jim Thorpe as a legendary football player. But after his playing days, he also spent quite a bit of time as an actor. He was 1/2 Native American and often appeared as an Indian, as he did here.

Thorpe was included twice in a set featuring other actors – Sterling Sports Auctions says it was produced in 1931. The pictures are said to be from the 1931 movie, Battling with Buffalo Bill.

Both postcards are sometimes referred to as 1920s issues but that would be impossible if they truly depict both men from that 1931 movie.

Two different postcards of Thorpe exist in the set (both are shown here) but there are many different color variations. Some have a black and white picture against various colored backgrounds. Others have a color-tinted picture. The exact number of different color combinations is unknown but I have listed the ones I have seen to date below. Others likely exist.

One postcard features a portrait shot of Thorpe looking off to the side and has his name on it. The other has actor William Desmond’s name on it but also features Thorpe off tot he side. In particular, the close up image of Thorpe was a popular one that was also used on a strip card.

While there are only two Thorpe postcards in the set, many more exist if you consider all of the color variations. Below are the ones I have seen to date.