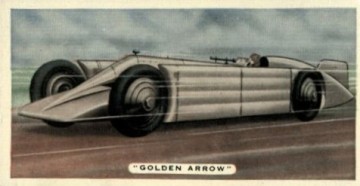 This international tobacco card set was issued by Ardath Tobacco for their State Express Cigarettes brand. Ardath issued a variety of tobacco card sets in the 1930s, including other sports releases. This particular series, like many, includes a total of 50 cards.

The theme of the set follows its title — speed. The set includes automobiles, airplanes, ships/boats, motorcycles, and trains. It is included here because the backs of some cards represent specific subjects. For example, auto racing driver Sir Malcolm Campbell is mentioned on the back of a card picturing his famous Blue Bird car.