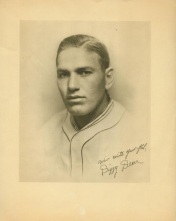 in 1936, Grape Nuts offered several items that could be requested in exchange tops of their boxes as part of their ‘Winners’ promotion.

Only box tops from Grape Nuts’ 12-ounce boxes were valid. The company also had 1-ounce boxes but those could not be submitted for redemption. Among the prizes were several items from star pitcher Dizzy Dean, including a photograph and a pin.

The 8″ x 10″ photographs featured a portrait picture of star pitcher Dizzy Dean wearing a baseball jersey. The photo has a thick cream border and a blank back. Dean’s replica signature was added to it as well as a special inscription that reads, “Win with your Pal.”

The pin was simple and made of brass. It included a portrait picture of Dean looking off to the side with a baseball used as the background. The bottom read, “Dizzy Dean Winners” and the pin measured nearly 1″ in diameter.

The picture and pin were just two of the prizes. Numerous other prizes were available and one pamphlet even touted as many as 49 different ones. Most were an assortment of toys and other children’s items but several were related to Dean himself. Those, as well as the redemption costs, are below.

Somewhat ironically, the Dizzy Dean prizes were much easier to obtain than almost all of the others. That is interesting considering that, today, the Dizzy Dean items are certainly the most valuable ones.

The prizes were sent from General Foods’ address in Battle Creek, Michigan. The contest expired on December 31st, 1936.