This multi-sport set features many athletes to appear in the 1936 Olympic games. The overall set consists of three subsets or series’. The set was a German issue and the product of Muratti Cigarettes in Berlin.

The formal name of the set is called the Brennpunkte des Deutschen Sports Olympic Games. Roughly translated, that means the ‘Focal point’ or ‘Featured German Olympic Games Sports.’ While produced in Germany, though, the set included athletes from all over.

While 216 cards are routinely cited as being in the set, that is not correct. Three different subsets actually exist and while the first and third contain 216, the second contains 288 for a total of 720. The set is often called a 1935 issue but part of it, the third series, was printed in 1936.

The cards are printed on very thin stock. That was common for some international issues, including other German ones, such as the popular 1932 Sanella and Astra sets. Those cards feel more like paper and that’s a similar situation here.

Of the major American sports, basketball, football, and hockey are all featured in the set. While those three are here, baseball is not. It has been reported that a Babe Ruth card exists, but that is not the case. This set does not contain any baseball cards but is listed in the baseball section of this site since it is often believed to include a Ruth card as shown.

The idea that Ruth is in the set, as I covered here, is false.

Grading companies have even been fooled as Ruth is listed as the subject on encapsulated flips (the labels on graded cards). PSA, SGC, and Beckett have all graded this as a Babe Ruth issue, driving prices in the hundreds of dollars. The card, however, has been proven to not feature Ruth and instead pictures a swimming trainer named Ernst Brandsten. In reality, this is more like a $1-$2 card at best.

Brandsten himself was a Swedish diver who had previously participated in the Olympics in 1912. He later immigrated to the United States and with his wife, another diver named Greta Johansson, trained divers at Stanford and at the Olympics. He was inducted into the International Swimming Hall of Fame in 1966. 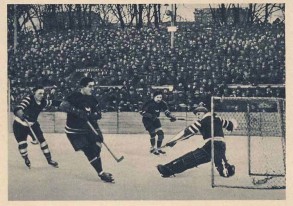 Even though Ruth is not in the set, some other major sports are also included.

In addition, a cartoon football card depicting the American sport is No. 284 in the second series. Other cartoon cards for sports such as boxing, tennis, and golf, exist, too. At least one basketball card exists, too, featuring Wuensdorf vs. Berlin, and tennis, wrestling, and golf cards are found here as well.

The most valuable card in the set may be that of track and field star Jesse Owens. While Owens has many 1936 cards, this his card in the 1935-36 Muratti set is seen has his first one and his rookie issue. In high-grade condition, the card can sell for several thousand dollars.

A complete checklist of this set is not currently known.