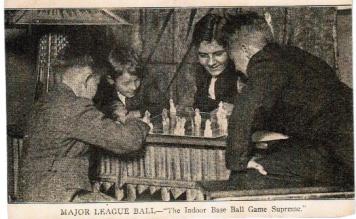 This is a trade card promoting a popular 1920s baseball game.

The card served as an advertisement for the Major League Ball baseball game. The board game used popular die-cut cards, which are heavily collected. The game produced the die-cut cards of players over a number of years from 1921 through 1930.

This card displayed a black and white picture of four children playing the game. The bottom reads, ‘Major League Ball – The Indoor Base Ball Game Supreme,’ which was the game’s slogan, as mentioned in this REA auction, linking the card to that game.