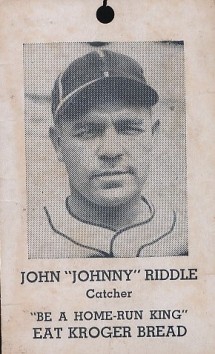 This set of cards is actually a collection of some sort of tags that were likely affixed to Kroger Bread products. The hole in the tag seen here is also in other Kroger Bread cards found to date.

These feature black and white images of players as well as their name and position. No team is specified but, based on the players included, it is known to feature members of the Indianapolis Indians.

In addition, while most cards have nothing beyond the slogan at the bottom, at least one card has been discovered that states the card is good for admittance to Perry Stadium, which was the home of the Indians, on June 16, 1936.

The known players in this set to date were all on the same team in 1935 and 1936. However, with the mention of free admittance to the stadium in 1936, that makes this an issue from that year.

Only a few cards are known from this set to date. Below is the current checklist of verified cards.