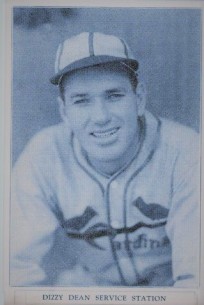 Dizzy Dean was a world class pitcher in the 1930s but, like many other players, had side interests as well. The Hall of Famer also owned a service station in Bradenton, Florida.

It isn’t clear how these cards were distributed but they advertised Dean’s side business. Perhaps they were given to customers. Or, perhaps they were distributed at other places in town since the backs state where the service station is. Maybe they were kept in the station as pictures that Dean could sign when present. Whatever the reason, they are not an easy-to-find collectible these days.

The front included a black and white image of him along with ‘Dizzy Dean Service Station’ at the bottom. The back states that his station’s location:

The Dean card described above is the only one in the set.