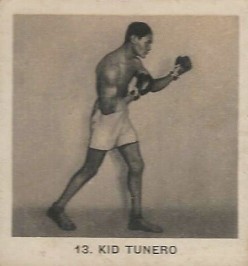 This extremely rare issue is a chewing gum set that was produced by Globo, a French company. The set includes various sports, including boxing and tennis, and is mostly known by boxing collectors here in America.

The cards are square in appearance with black and white images of athletes. They are basic with a card number and the athlete’s name in the bottom of a white border. They almost have the appearance of a square Polaroid picture.

Backs of the cards mention there are 64 cards in the series and include a short description of the subject (in French). The bottom of the back has a short advertisement for Globo.

The cards are extremely rare in the U.S. and not commonly seen. If they are offered on eBay or elsewhere, often, it is from French sellers. The set includes several big names, including boxing Hall of Fmers Max Schmeling, Joe Louis, Jack Dempsey, and Georges Carpentier, as well as tennis great Henri Cochet. The card of track and field star Jesse Owens is also one of the most important cards in the set.

A full checklist to the set can be seen here.