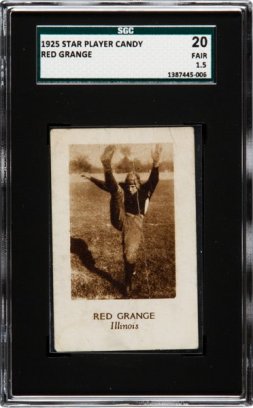 Many collectors of pre-war cards are familiar with the uncategorized 1928 and 1929 Star Player candy baseball cards. However, a football set was also produced around the same time period.

The cards are basic and design, mimicking the baseball set from 1928. they include a player image with the player’s name at the bottom. Backs of the cards are blank. The set featured both professional and collegiate players.

For a while, this set was credited as being an anonymous or unknown set. But since they are so similar to the Star Player Candy baseball sets, they are now known by that name.

Another mystery regarding the set was surrounding the dating. The cards are often referred to as a 1925 set. However, as this thread indicates, that date doesn’t match up with the players and teams featured in the set. Another possible date thrown around is 1928 since that does seem to match the players and teams more closely. Even that, however, cannot be confirmed. It also would seem to conflict with other cards in the set. Red Grange, for example, is pictured with his college team, Illinois. He left there in 1925, however, and would have been in the NFL for several seasons already so using a college image of him would seem to be odd.

Another theory is that the set could have been released over multiple years. But the dating of this issue is still very much up in the air.

The football cards are scarce with no more than a few known graded copies of each card.