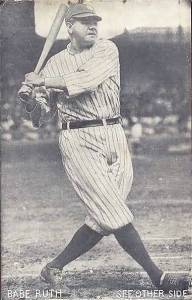 The 1933 Blue Bird Grape Soda premiums are small post-card like photographs of Yankees slugger Babe Ruth. Two different pictures were offered – one showing Ruth’s swing from the front and another showing him from the side.

While Ruth was probably the more interesting side on the card (and, consequently, the reason the card is valuable today), the real purpose of the card was to serve as an advertisement for Blue Bird soda. And more specifically, it was used to promote a redemption program.

Backs of the photographs included a special redemption offer for consumers as well as a brief advertisement for Blue Bird Soda, which was printed as ‘Let’s Drink Blue Bird – More Delicious than Grape Juice.’ The key to the redemption program was the No. 29.

The promotion allowed consumers to send in 29 Blue Bird Soda bottle caps and a small fee to obtain either a Babe Ruth glove ($1.29) or an official league ball from Spalding ($.89).

The cards were not classified by Jefferson Burdick in his American Card Catalog with the rest of the J-Cards (soda issues).