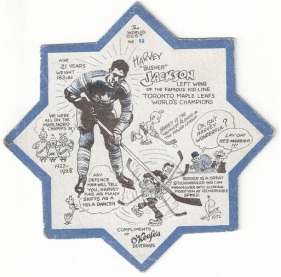 The 1932-33 O’Keefe’s Toronto Maple Leafs set was a unique collectible. The coasters were distributed by O’Keefe’s Beverages and they were reportedly available through the company’s ‘Big 4’ soft drink brand. The backs seem to indicate this was true as the have the ‘OKeefe’s Big 4’ logo on the back along with the slogan “Each a leader in (sic) it’s class.”

The coasters are oddly-shaped with 16-sides to them and they measure a little over 5″. As far as what is printed on them, well, that is unique, too. Each coaster features cartoon drawings of players in a comics type of format. There’s a sketch of a particular player and he is then surrounded by all sorts of additional cartoons with facts about him.

Four coasters in the set of 20 have not been located yet, according to this site. However, should they exist, they are believed to be Ken Doraty, Dick Irvin, Conn Smythe, and Bill Thoms.