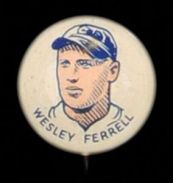 The 1930 PR4 Cracker Jack / Button Gum Pin set includes 25 different baseball players. The pins are somewhat generic looking with color cartoon drawings of the player’s face along with his name on the fronts.

The company that should be attributed to making these pins is still sort of a mystery. The Button Gum company was formerly recognized as the distributor but these pins are more commonly referred to as a Cracker Jack set. PSA, for what it’s worth, designates them as such. Compelling evidence, such as this advertisement, is even present for a company called General Gum, Inc.

While 25 baseball players are included in the set, the overall set is much larger. A total of 100 pins are actually included in all as the series includes presidents, actors/actresses, Native Americans, and other famous personalities. Some of the bigger names outside of the presidents include Wild Bill Hickok, Daniel Boone, Davy Crockett (his pin is misspelled ‘Crocket’), Will Rogers, and Clark Gable.

Confirming the manufacturer and distributor of these buttons seems to be very much up in the air.