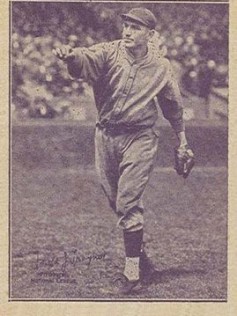 The 1929 Leader Novelty Candy set is a rare issue. The set checklist continues to grow with new issues being discovered on occasion. That is understandable because the set was only recently discovered.

The fronts of the cards include a color-tinted image of a player with only one color ink being used (the cards come in various ink colors but only one is used per card). Along with the player picture, a replica signature is also included along with the player’s team. The card are blank-backed and can have the appearance of a strip card of sorts.

The cards measure approximately 1 3/4″ x 2 5/8″ However, like many other pre-war sets, the exact measurements can vary a little bit.

The cards are believed to have been issued inside boxes of Leader Novelty’s candy. However, they are also often found with uneven, hand-cut edges, making them appear to be strip cards of a sort. Thus, questions remain on the set’s distribution.

Images used for the cards were taken from the R316 Kashin set, as well as some others like the W553 and W554 sets. For that reason, some believe that the full checklist for the set is the same as the Kashin issue. But to date, nowhere near the 101 cards that appear in the Kashin set are known for this release.

Occasionally, some of the boxes that were used for the candy/cards make their way out in to the public as well. Those boxes included a unique baseball scene.

Those boxes offered a redemption program of sorts. Collectors could receive prizes in exchange for returning the boxes. Interestingly, while this was a baseball product, some of the prizes were for the sport of tennis. These prizes were available:

A completely confirmed checklist of the set does not exist. However, 34 cards are currently known.

Note that my checklist includes 35 cards. That is because both PSA and SGC have graded a card of Lloyd Waner according to their pop reports. Paul Waner is believed to be in the set so it is possible that they have mistaken him for Lloyd. But because both have claimed to have graded one, I have added Lloyd to the checklist below.