It’s in the Details 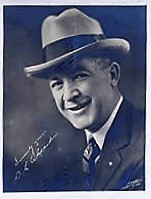 Otto Treulich and Son was a clothier based in Chicago. The company produced this trade card of sorts featuring Baseball Hall of Famer Grover Alexander.

Alexander was pictured on the front in formal wear of this black and white card. In addition to the close-up portrait of the pitcher, his replica signature was added along with the words, ‘Sincerely yours.’

Backs of the card had a stamped advertisement for the clothier, similar to what other companies did on trade cards. The reverse has the Otto Treulich and Son name and gives the company’s address in Chicago.

Overall, the cards are pretty rare and not easy to find.

This card appears to be a standalone issue and not part of a set.