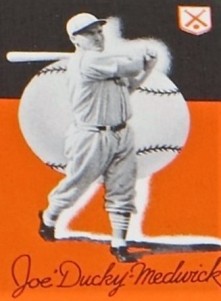 A board game celebrating major league star Ducky Medwick was created in 1939 by a local game manufacturer, the Johnston-Breier Company. Included in the game were a deck of cards all featuring the Hall of Famer.

The game was called the “Joe ‘Ducky’ Medwick Big Leaguer Baseball Game. As the box states, it was ‘As the Big Leaguers Play it.’ That is a popular theme among early baseball games that often advertised them as realistic baseball.

While the game cards are often called a 1937 issue, the game wasn’t actually distributed until 1939. A 1937 date appears on some of the cards, but the game did not officially appear for sale until 1939. That wasn’t out of the ordinary. Other baseball games of the time period were actually copyrighted earlier but not produced until sufficient funding could be found.

The game cards all have the same image of Medwick and his replica signature. A crossed bats and ball logo is printed in the upper right corner and Medwick’s black and white image swinging a bat is displayed in front of a large baseball.

Interestingly enough, a prototype of this game is believed to have been found by Robert Edward Auctions since it varies slightly from the regular game.

It is difficult to imagine that many of these games were produced. An occasional set may surface for sale once in a blue moon but it seems that finding singles from it is equally as difficult. These are rarely available for sale and when they are, type collectors are usually all over them with the cards selling for $50 or so at times.

A checklist of the cards in the game is not listed here. However, all cards in the deck depict the same image of Medwick on them.