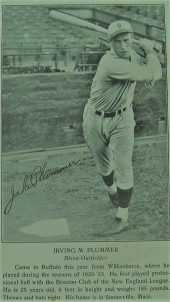 The 1934 Buffalo Bisons photos included black and white pictures of the minor league team from that season. The pictures include the player’s name and position at the bottom as well as a biography.

It is possible that more pictures exist but have simply not been discovered. Only four have been found to date but that doesn’t match what the Bisons’ did in other team issues.

Finding more photos in the future doesn’t seem like an impossibility at this point.

The four players in the set were not stars. But as Heritage Auctions pointed out, three of the four eventually made it to the big leagues.