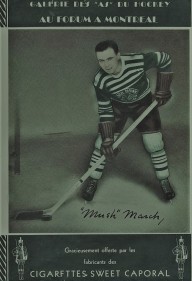 These photographs were given away inside of hockey programs at Montreal Canadiens and Montreal Maroons games in 1934-35. While distributed only in Montreal, the set actually included players from other teams in addition to the Canadiens and Maroons, including the Blackhawks, Bruins, Maple Leafs, Rangers, and Red Wings.

While Sweet Caporal, a prominent cigarette brand, was affiliated with and produced numerous baseball issues, they were only involved with a few hockey releases – this set and the black and white postcard issue from 1910.

Photos featured color images against black and white backgrounds. At the tops and bottoms were various colored borders. While known to collectors as the Sweet Caporal Photos, the tops stated the actual name of the set – Montreal Forum’s Gallery of Hockey Stars. Bottoms read ‘Presented with the compliments of the Manufacturers of Sweet Caporal Cigarettes.’ Across the image was a replica signature of the player. Backs of the photos had a biography of the player presented on the front along with his name and a brief advertisement for Sweet Caporal.

As with other tobacco issues, some collectors would remove the part on the front mentioning the product. For that reason, you will sometimes find these with the photos trimmed without the Sweet Caporal printing on the front.

Here is a complete checklist of the set.